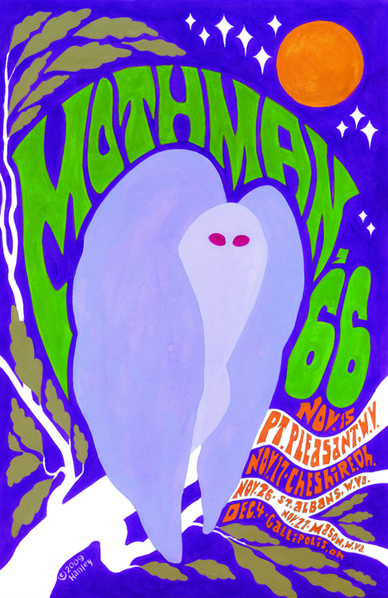 
The year was 1966, the place: Point Pleasant, West Virginia. On a cold November night, four young people were out cruising when they saw a creature that came to be known as Mothman. For over a year following the first sighting, Mothman was seen again and again in West Virginia and Ohio. This poster commemorates the events of 1966. Each of the dates and places is presumed to be factual and taken from John A. Keel's book, The Mothman Prophecies (1975). Mothman's appearance here is as the witnesses first described him--as a bird-like creature with glowing red eyes.


* Hand-drawn and hand-painted original art * Reproduced on heavyweight paper by offset press * Full bleed (the image goes to the edge of the paper) * 11 x 17 inches--fits a standard-sized picture frame * $4.00 each *

Terence E. Hanley
I am an artist and writer, an illustrator and cartoonist, and I like to create and publish my own books. I'm always glad to talk to other artists and writers. Feel free to contact me.

Links to My Sites

Links to Other Artists